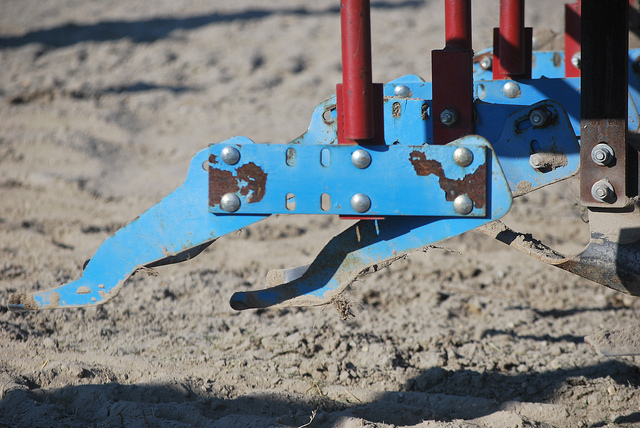 Perils of the Connected Farm

Note from the editor: My friend Greg Shuflin posted the following story on Facebook. I asked if I could redistribute it here, and he said yes.

It was a pretty crazy day on the farm — the farm of the neocyberpunk 2040s that is, where cybernetically modified agrohackers wielded vast armies of AI-controlled smart tractors and fertilizer drones to eke their genejacked grain out of the dry soil of the post-Ogallala hellscape that was once a polity called “Kansas”.

Old Farmer Mauricio had programmed his cyberbrain to start nanofabbing caffeine molecules at 6am, and ever since then he’d been dealing with shit — some web bandits had exploited a quantum memory zero-day and broken into half of his private cloud’s namespace. Probably some fucking thirty-something LOMPs [low-marginal-product-of-labor proles on basic income] with nothing better to do than fuck with people, Mauricio thought to himself darkly.

Before the sun was finished rising, Mauricio had patched the vuln, killed as many of the malware AIs as he could find on his network, and had started to restore the water-recycler control AI from backup. He grabbed a quick breakfast of rice porridge and a Chinese doughnut, then woke up his lazy teenage nephew Chuck, who was staying with him during the growing season.

“Time to get up, Chucko,” he said, as the sleepy teen fumbled for his ocular implant on the pile of dirty laundry near his bed. “We’ve been hacked. I really need your help today.”

Chuck quickly brushed his teeth, threw on some work clothes, and went to the hovertractor in order to go do a hard reset on the network node out in field #3. But as he pulled the tractor out of the garage, he found that his way forward was blocked.

All of the AI-controlled wheel hoes that his uncle owned were spinning in circles and brandishing their spikes, in the most menacing fashion that their hardware allowed. Of course, the damn wheel hoes were behind the same firewall as everything else! So they had been infected and turned by the LOMPs’ fuckery too.

Mauricio let his nephew set out, with a word of warning: “Watch yourself, kid. These hoes ain’t loyal.”

You may be wondering, “Was that whole story really just build-up for a pun based on a Chris Brown song?” The answer is that yes, yes it was. Watch out for the LOMPs at work today, y’all.

The Staid Side of Money