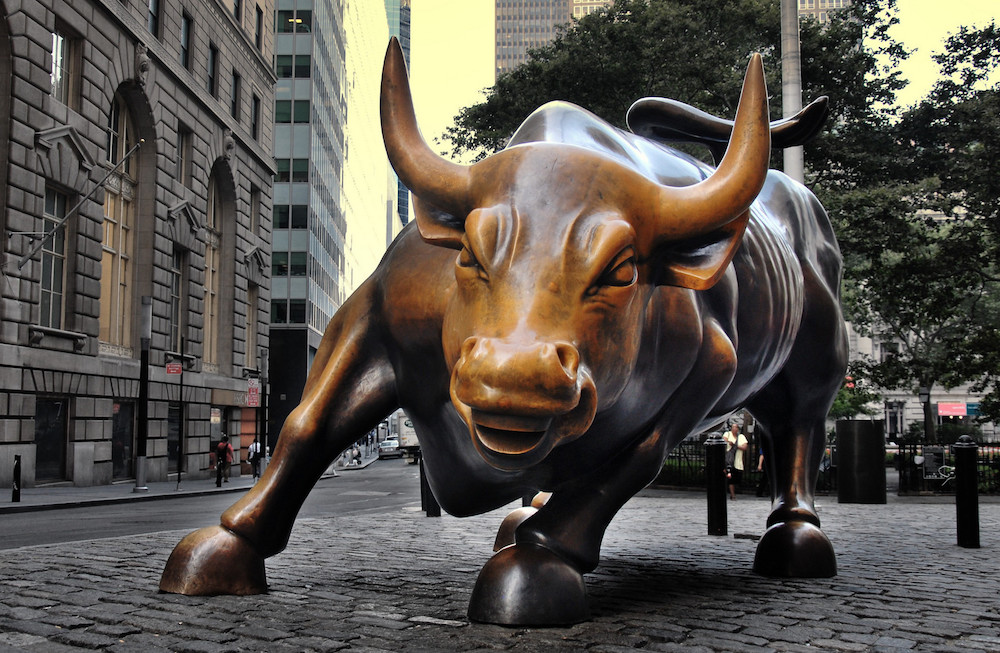 The bull sculpture on Wall Street. Photo by Sam Valadi.

The Staid Side of Money

I interviewed my Twitter friend Marc Hochstein, who is the editor-in-chief at American Banker, about finance and technology. (He didn’t speak with me in a professional capacity, but I think his workplace is helpful context.)

Hochstein started his career as a wire service reporter at Dow Jones. He called it a “character-building experience” that involved a lot of cold-calling day traders. The upshot is that Hochstein has been reporting on banks and finance for decades, so his perspective on recent industry developments is interesting.

(Why you should care about this: Our world runs on money. The financial-services industry is hyper-entwined with government, and together they’re the base-level system that everything else is built on top of. That’s actually a simplification since “everything else” and “finance” developed concurrently, but you get the idea.)

I think this quote sums up a lot:

In the last two years — maybe three or four years — there’s been a lot more interest in technology as a potentially transformational force, than there has been in a very long time. You could argue that banking was always, in a way, a technological industry, or always a data industry. There’s a quote from Walter Wriston, who was the chairman of Citicorp back in the ’80s and ’90s. I forget the exact verbatim quote, but it’s something like, “A bank is nothing but a data warehouse, that’s always what it’s been.”

But the banks — financial institutions in general — have been slow to upgrade their core technology, and for some understandable reasons. Changing the core of the bank is a hard thing to do. […] When times are good, when they’re making a lot of money, there’s no real impetus to change anything. And then when times are bad, they don’t have the resources to do anything. Or resources are scarce, I should say.

Hochstein pointed out that the “Uber narrative” hasn’t played out in finance like it has in other industries. He told me, “The barriers to entry are higher. The stakes are higher, because you’re talking about people’s money.” Fintech startups can’t afford to beg forgiveness instead of asking permission. Regulators don’t take kindly to that, and users don’t either.

Technology hasn’t shaken up finance as much as people in Silicon Valley might have expected. Over the last few years, Hochstein explained, “The rhetoric changed from ‘fintech is going to eat the banks’ lunch’ to ‘fintech is going to make banking better at what they do’.” Still, “it’s a little early to say” whether fintech is actually improving banking, or what the degree of change will be. “I wouldn’t say it’s been a profound effect, but it’s there.”

On the bright side, “Transferring money is slowly getting faster.” The Automated Clearing House is finally moving to same-day settlement. “Part of the reason why they did that, why they finally had an impetus to go there,” Hochstein said, “is because of things like Ripple, and bitcoin, and cryptocurrency, as well as real-time payment systems that you see in a lot of other countries.” Hochstein noted that regulators and the Fed have also been pushing in this direction.

I find this slightly mind-boggling. It’s a big deal that ACH is moving to same-day settlement — not real-time, just same-day. In the year 2017.

I asked Hochstein which issues are going to dominate a lot of attention going forward, and he mentioned “open banking” and data portability. Basically, banks have a tremendous amount of lock-in because of all the information they’ve collected and stored about your identity and your account activity.

There’s some talk of forcing banks to provide this information to competitors — or whoever else might be authorized by individuals, e.g. money-management apps like Mint — via API. Guess whether the banks want to do that!

In conclusion, finance gonna finance. Big companies gonna rent-seek. They change when they’re forced to, either by regulation (Dodd-Frank Act, for example) or by the competitive environment. In general, these institutions move slowly. On balance that’s actually a good thing, considering how much havoc they could potentially wreak.

Thank you to Marc Hochstein for talking to me — follow him on Twitter or read his articles.

Photo of the Wall Street bull by Sam Valadi.

Perils of the Connected Farm

Trust Not the Green Lock