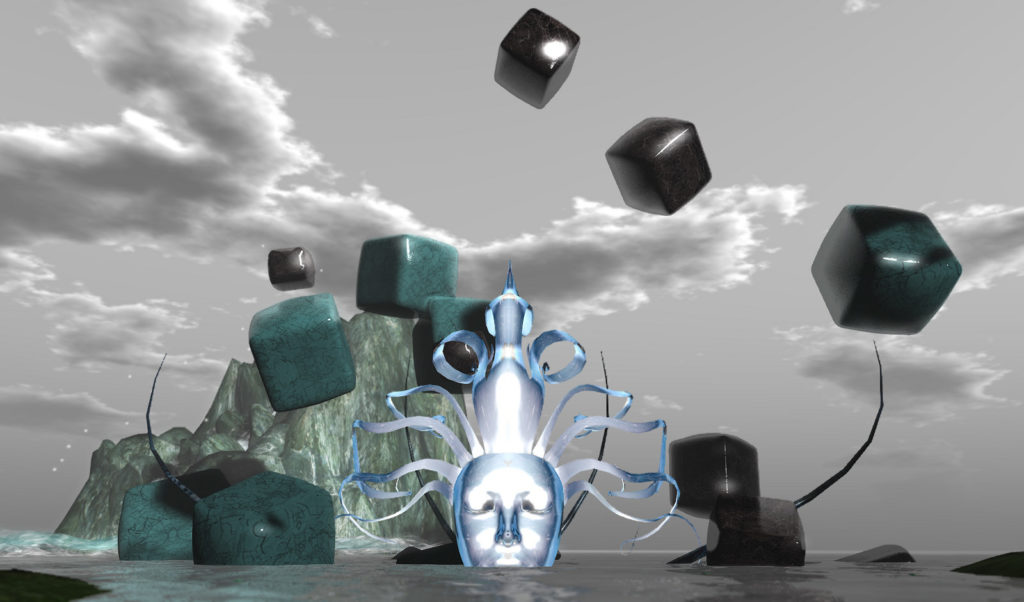 Imagine that you can upload your mind into a tiny computer chip. (Or maybe “transport your mind” is a better phrase, since I don’t want to address the gnarliness of a single personality existing in multiple hosts.) Put aside whether this is technically possible — speculating on the topic is useful regardless.

So, your mind is housed in an itsy-bitsy sophisticated machine. That mind-chip can be implanted into anything, right? How about a giraffe’s body? How about a rock? Maybe you want to experience the stillness of a boulder in a mountain stream, like someone on a train whose face isn’t buried in their smartphone.

In this scenario, we have to change our fundamental assumptions about the environment we navigate daily. If every object can be sentient, you must step carefully. You must watch yourself constantly, because you might be watched by someone else. (This is already true to a certain extent, but for the most part other individuals aren’t paying attention to you, especially not without your knowledge.)

I suspect that most people will still want a body. Maybe a more perfect body, with flawless muscles and embedded martial arts knowledge. But they’ll want to represent themselves as humanoid. Look at Second Life — sure, you have furries and aliens and other unhuman creature creations, but they’re outnumbered by hyper-sexed Homo sapiens analogues. (Disclaimer: I’m basing my assumption on Flickr albums of screenshots.) I’ve described this dynamic before:

“What will our avatars look like in a hundred years? Post-gender and post-form, or exactly like the musclebound hunks and bit-titted blondes that titillate today’s Second Life denizens? We mustn’t forget the furries and weaboos, already a significant contingent of any visually oriented social network (which is all of them) (especially 4chan) (maybe they don’t haunt Instagram? idk).”

I still wonder about the world where I can inhabit any container. What will that do to gender? Many of us already acknowledge that a person’s genital configuration does not determine their gender. We have two common phenotypical maps, but people’s brains have claimed many identities beyond “male” and “female”. Bigender, nonbinary, agender, and various other labels. I suspect that most of you reading this accept gender diversity as normal and positive.

I’ve grappled with this personally — I identify very strongly as a woman, but I can’t figure out why. What draws me so strongly to femininity? It must be a tangle of biology, evo-psych, and socialization. In terms of how we treat people, the origin of nonbinary genders is irrelevant, but it’s still an interesting question. I suspect technological advances will help us whittle down the list of potential answers.

This idea was posed by my boyfriend and further inspired by some discussion in the chat group. Also, obligatory tip o’ the hat to Laboria Cuboniks.

The Inconvenience of Being Anything Other Than Human