“In order to protect Melbourne’s reputation as Australia’s street art capital, CCTV cameras have been installed in areas deemed to be urban art hotpots. These cameras will serve a dual purpose, firstly to ensure that culturally significant works are protected for future generations to enjoy, and secondly, to be used as evidence against the artists should their work turn out to have no cultural significance.” 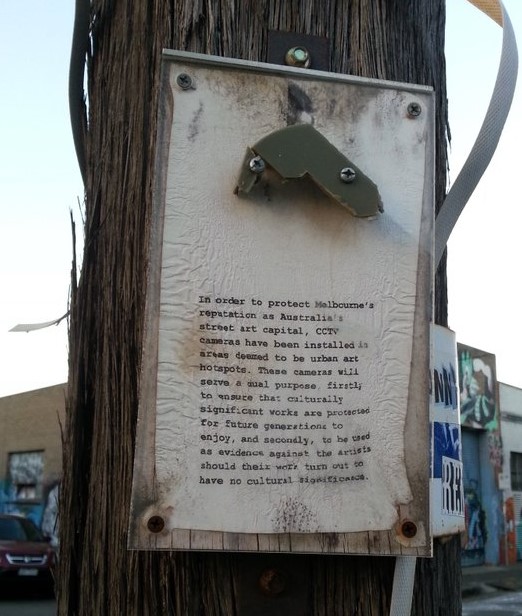 There is something on-the-money about that poster. Surveillance has become so normal — you’re being watched constantly, all the time. Watched and recorded. It’s mundane. No one pays attention to most of the footage, but your presence and your actions are preserved. So many ambient cameras, loosely intended for security, are mounted on buildings. They absorb audiovisual data 24-7. The files are archived — deleted periodically, but available for at least thirty days. Friends’ smartphones and strangers’ smartphones capture your image. Your face is disseminated on Instagram and through Snapchat.

There’s always a good reason for these activities, right? No one is conducting surveillance for surveillance’s sake (except maybe the NSA). It’s to prevent shoplifting. It’s to express love via Facebook tagging. In fact, the latter type of recording wouldn’t usually be described as surveillance. But let’s look at the dictionary definition: surveillance is “the act of carefully watching someone or something especially in order to prevent or detect a crime”. So surveillance usually pertains to illegal behavior, sure, but it doesn’t have to. Surveillance is systematic watching and recording. If that doesn’t describe how teenagers use Snapchat, I don’t know what does.

Like most technologies that become integrated into everyday life, surveillance cameras are inherently political. But they don’t necessarily support one side or the other. However, the data they capture is almost always deployed to reinforce the state’s authority. Citizen recordings of police brutality provide a notable exception, but even then the framework of laws and judgment is inescapable.