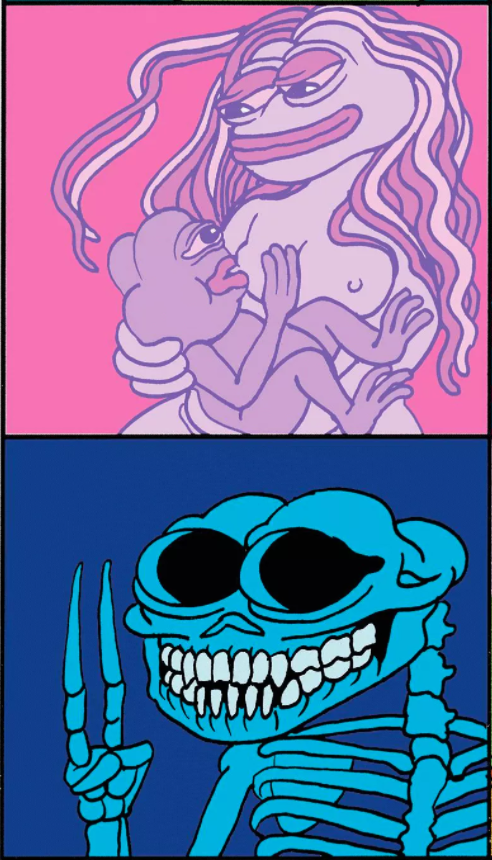 Artwork by Matt Furie for The Nib.

For those of you who aren’t familiar, the Death of the Author is a theory that can be aggressively summarized like this: A creator’s interpretation of their own work is not definitive, but rather one among many interpretations generated by the people who experience the creation.

Therefore, a given piece of art doesn’t “mean” anything in a be-all-end-all sense. The meaning resides with the viewer. A sufficiently compelling interpretation may end up dominating public discourse, but whether it’s “true” is beside the point. “True” is not always a relevant or adaptive quality for an idea. Information spreads based on other factors. 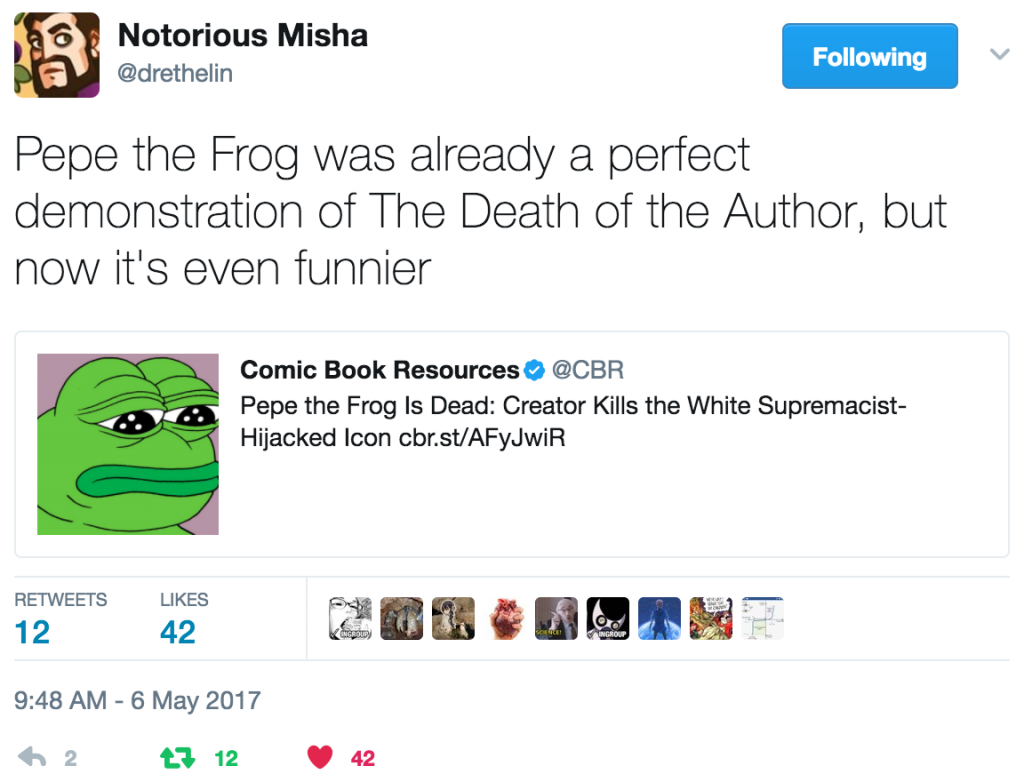 The average person who recognizes Pepe’s woeful face has no idea that he was first drawn by Matt Furie for a comic called Boy’s Club. The internet is practically an author-killing machine, since it’s so easy for content to be pulled out of its original context. That’s how memes work — both the image-plus-caption kind and Dawkins’ original formulation.

Now Furie has symbolically slaughtered Pepe, and I really mean symbolically, since the rest of the Pepe-using internet will ignore this. (Except… it’s possible that Blepe will become a robust replacement? I dunno, y’all, 4chan has unpredictable whims.) To his credit, Furie does seem to understand how it works:

Before he got wrapped up in politics, Pepe was an inside-joke and a symbol for feeling sad or feeling good and many things in between. I understand that it’s out of my control, but in the end, Pepe is whatever you say he is, and I, the creator, say that Pepe is love.

I think the phenomenon actually goes further than the Death of the Author. First the author dies and then their body is resurrected and defiled, or spliced into a Frankenstein-style army. (Sorry, I’m butchering the metaphor, and yes, pun intended.)

Alt-right jokesters aren’t passing around the original “feels good man” reaction image anymore. Well, they are, but it’s not the dominant use-case for Pepe. He’s been remixed and morphed beyond what Furie created — internet denizens took the idea and ran with it, like they did with Slenderman. (As far as I know, Pepe hasn’t motivated a murder yet.)

I mentioned in my previous missive that I want to investigate how information flows up and down the cultural stack, from subcultures to the mainstream and back again. The process that Pepe underwent — is undergoing — constitutes one pattern. I suspect that authors who make meme-able content will lose bets on their own survival.

Header artwork by Matt Furie for The Nib.

A Shift in the Wind