Kids called them Hollow Heads. When the androids hit the market, the term “Bunnies” almost caught on instead, inspired by the ear-like antenna prongs, but the alliteration of “Hollow Heads” was more appealing to the first generation who interacted with the machines. 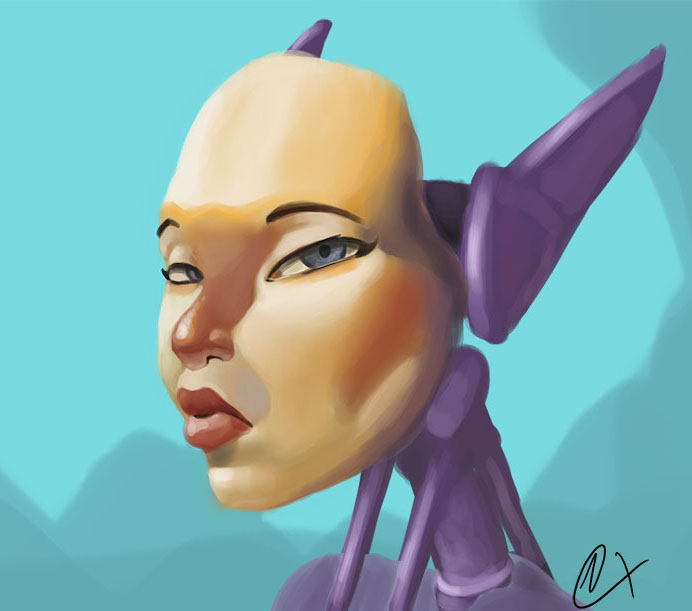 Besides, the increasingly powerful House Rabbit Society lobbied against the trend conflating their beloved pets with humanoid robots. After dogs died out in the 2030s, rabbits got a lot more popular, and their owners weren’t keen on having their endearments coopted.

One of the original engineers admitted on a virtustream that his design riffed off of an old film, back when screens were dominant. He said it was called Chappie. No one else seemed to remember this movie and soon the engineer disappeared from spokesmanship.

The other big innovation, besides the distinctive “ears” (which didn’t actually have any audio-processing capabilities), was to make the androids slightly insectoid. Just a little something in their structure. Babies found them unsettling, and this was judged to be good. Faces without heads — you could relate to them, but you’d never mistake them for human.

At first the market responded better to realistic androids. Boutiques liked them, as did hotels. But after a couple of high-profile impersonations splashed all over the virtustreams, along with that one abduction, the Bureau of Consumer Protection pushed Congress to regulate the new machines. They codified the Hollow Head design, and soon a thousand variations were being imported from China.

It wasn’t that the androids had been going rogue. Their owners programmed them for nefarious purposes. The nice thing about the Hollow Heads is that they really stood out, so you wouldn’t have them going around signing contracts without being detected.

Of course, the US Empire’s sphere of influence was only so big. Plenty of factories in Russia kept churning out androids with full craniums, some also featuring convincingly visible pores.