As his $10 Patreon reward, Jeremy Southard asked me to write about transhumanism. So that’s been in the back of my mind for a few days. The trendy H+ story this week is DuoSkin, hyped by MIT Media Lab:

“DuoSkin draws from the aesthetics found in metallic jewelry-like temporary tattoos to create on-skin devices which resemble jewelry. DuoSkin devices enable users to control their mobile devices, display information, and store information on their skin while serving as a statement of personal style.” 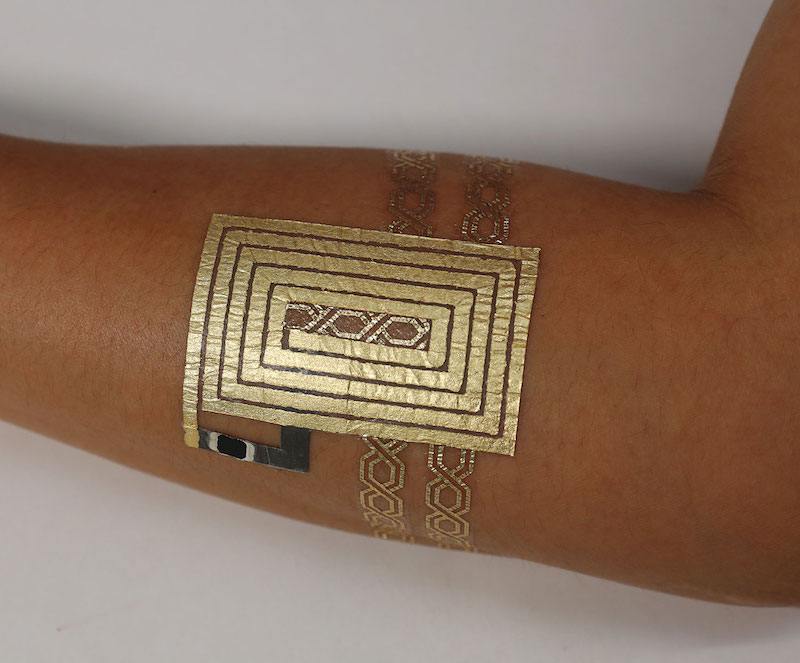 DuoSkin is pretty and I would love a pink version, but I can’t get excited about the technology. I’m sure there are useful applications — a clandestine version could add to the espionage toolkit — but this cosmetic rendition seems a little gimmicky.

If you look at past Exolymph dispatches on transhumanism, you’ll notice that I’m more drawn to examinations of ways that we already augment our bodies than to speculative developments. Here’s why: I have zero interest in gadgets — what fascinates me is the sociology, the power relationships, the humanness of how we react to new tools. (This is not to say that there’s anything wrong with liking tech for its own sake.)

The most important transhumanist technology to emerge in the past fifty years is the internet, or more specifically networked computers. It’s a bit boring, since we’re all so used to living with it now, but the ability to store and access information at this scale is unprecedented.

I guess people don’t think of the internet as transhumanist because it’s not physically integrated, but to me that just seems like an implementation detail. For example, I store 90% of what I read online so I can reference it later. Effortlessly. My archive is quite literally a personal memory backup that I can keyword-search.

But I’m a power user. You can argue that instead of localized, individual-specific augmentations (whether targeting the body or the mind), the future is about massive crowdsourced extensions. Think Wikipedia.

Pokémon Go also loosely fits into this category — is your fitness assistant an app personalized for you, or a clever game featuring beloved childhood characters that your whole social circle uses? Which sounds more 2016?

Actually, I’m calling it now — augmented reality and transhumanism will merge beyond sensical separation within fifty years. Or maybe I just have a particularly expansive notion of what counts as transhumanism?

But consider this: Pokémon Go, widely lauded as the first consumer-focused augmented-reality success, would not be possible if most people didn’t already have smartphones in their pockets. Now imagine the mini computer is embedded in your hand, or your retina, or what-have-you. In what meaningful way would augmented reality be separate from transhumanism?

It may seem like pure semantics, but language reflects and shaped how we think about things. Our bodies are already less discrete than we think they are.