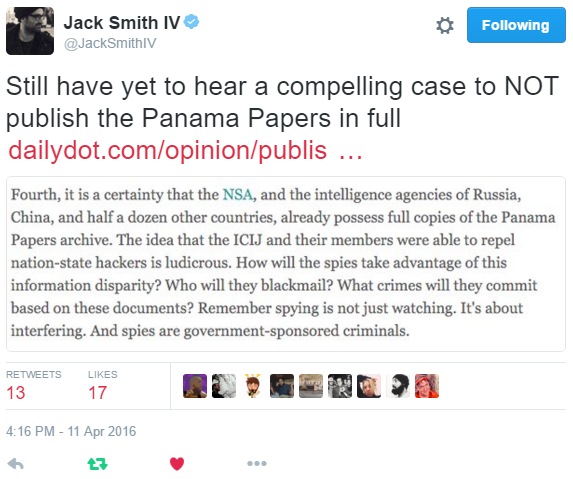 Jack Smith IV on Twitter, linking to an article that I quote further below.

The massive corpus of documents called the Panama Papers has been reported on, selectively, but not released for public review. I have a problem with this. I don’t think the journalists involved are malicious, but I also don’t trust them, for all the regular reasons why I don’t trust people who control the flow of information. Craig Murray’s excoriation of “western corporate media” overstates the case a bit, but he does a good job of summarizing the obvious concerns.

The International Consortium of Investigative Journalists coordinated this shindig. In response to criticism like Murray’s, the head of ICIJ told Wired “that the media organizations have no plans to release the full dataset, WikiLeaks-style, which he argues would expose the sensitive information of innocent private individuals along with the public figures on which the group’s reporting has focused.” Again, I don’t doubt that the ICIJ is a reputable organization, and their data analysis sounds quite rigorous. But this gated approach is fundamentally dangerous.

I summed up my initial thoughts on Twitter: “Yes, opening up the data would compromise the privacy of innocents. I think transparency is worth the collateral damage. Tradeoffs!” Also: “True accountability doesn’t take place in silos.” I am by no means an open-data absolutist, but I think this is a case where the benefits outweigh the costs. Cybersecurity reporter JM Porup went further in The Daily Dot:

“Whoever funds the investigation affects what gets covered — and what gets emphasized — and what doesn’t. As Wikileaks pointed out, USAID funded the attack story on Russian President Vladimir Putin. What stories did not get funded because they might make America and its allies look bad? This is a subtle form of economic censorship, but censorship all the same.”

Given all of this, I’m annoyed that the Columbia Journalism Review posted a sanctimonious article condemning critics of the ICIJ’s closed-data scheme as conspiracy theorists, lumping all of us in with Alex Jones. Jack Murtha wrote, “What’s most striking is how a misunderstanding of how the news media works can simultaneously condemn proven muckrakers and empower state-run propaganda arms.” Uh, no. I don’t think anyone misunderstands how the news media works — journalism is actually very straightforward at an object level. We just disagree with your methods, sir.

As LA Times reporter Matt Pearce quipped on Twitter, “Nobody loves a gatekeeper.”