Chekhov’s Katana / Survive By Being Hard To Hunt 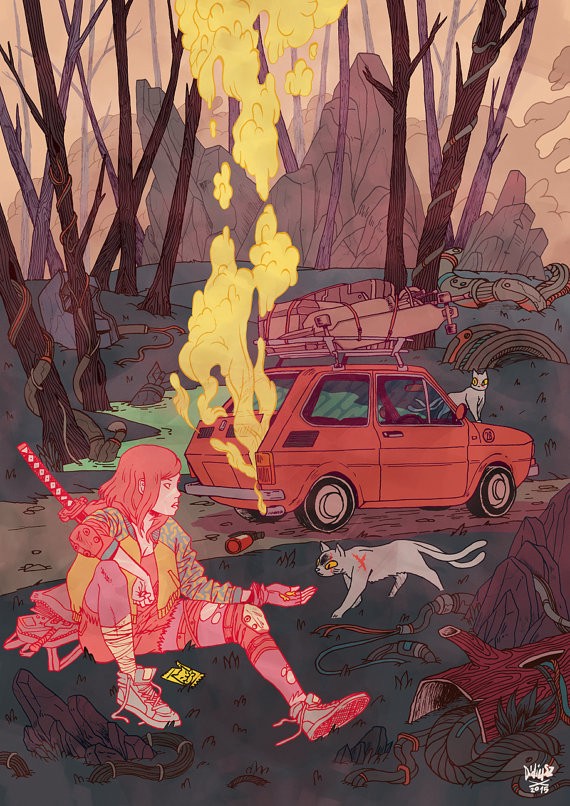 Bad Girl In The Future by Didiusz, available for $12.26 on Etsy.

The car was definitely and thoroughly broken down. Melinda couldn’t jump the engine because the trees weren’t even sparking. There was no sizzle left in them — she could tell. It was an old car anyway, running on 2078 software. The dealer probably jailbroke it in the first place. Melinda shook her hair out of her eyes, halfway shaking her head at the results of buying a cheap car. She would have jacked one, but it took ages to strip the tracking gear out of a stolen model.

Melinda sat on the ground, and a grey cat inched toward her. It looked ready to nudge her outstretched hand, but it was staying cautious, anime eyes wide open. Gene-manipped pets were cute but sometimes their exaggerated features verged on creepy. The animal’s tail twitched. Melinda eyed it suspiciously. She wasn’t sure that it wouldn’t bite her fingers. Who knew what bad habits they picked up in the wild. Maybe it was hungry.

Melinda was hungry, certainly, but not hungry enough to try manipped meat that wasn’t tailored for human metabolisms. Sick of waiting for the cat after thirty seconds, she picked up her satchel and drew her katana. As soon as she moved, the creature darted away, joining its companion on the hood of the car. Melinda weighed the sword in her hand. Keeping it out was impractical for walking, but she wanted to be able to react quickly. Traveling on foot felt insecure, at least outside of the city.

She thumbed the switch, unlocking it with her fingerprint. The blade split silently and its sharp edge emerged. Melinda’s hip buzzed with the 2FA notification, and she pulled her phone from her pocket. If she didn’t enter the passphrase within ten minutes, the katana’s edge would retract and she couldn’t cut anything. It was still useful as a cudgel, but better as a sword.

Melinda walked down the rutted road, passing more trees with ruined wires. Her boots scuffed against the dirt and gravel, but a few chunks of asphalt remained. As soon as hoverjeeps got cheap enough for anyone to buy, which must have been fifty years ago, it was only a matter of time before the government neglected the roads. They had plenty of other infrastructure projects to fund.

Melinda kept a sharp eye on the forest surrounding her. Gene-manipped cats sitting near the edges of the road darted back into the trees as she passed. If Melinda sat down and didn’t move, they would flock to her, but they were sensible enough be cautious at first.

Melinda was heading to a city satellite, returning to the shanty village that she’d passed earlier. It was fifty miles out from the main city, but still had more supplies than she could find elsewhere. Their smuggling operations were well-organized. Long walk from her broken-down car, though. Melinda kicked a clump of dry mud. It exploded into dust and small chunks, and a cat hissed. 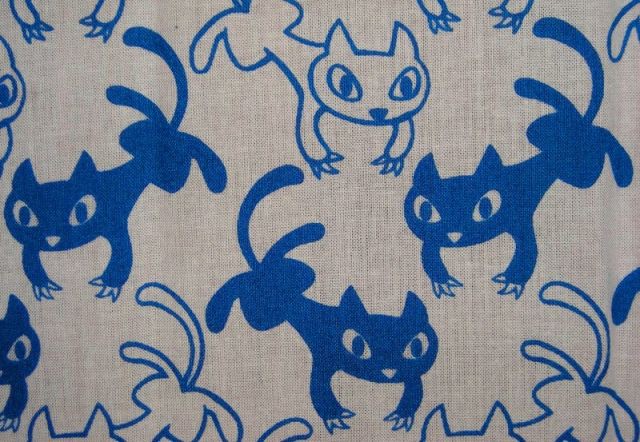 She hiked for more than a hour to reach the dilapidated town. It was a small settlement, consisting of maybe fifteen tents and five extra structures cobbled together from salvaged wood and car shells. The buildings were arranged to circle the water pump in the middle courtyard. Melinda walked toward the well, tapping tent walls with the flat of her katana as she went. No one yelled and no one emerged. “Probably out hunting,” Melinda muttered. She wondered if they ate cats — maybe manipped meat was okay after all.

Melinda was thirsty. She reached the water pump and tapped its holo display to check the status. Half-full, tolerably clean, and the price per liter wasn’t devastatingly high.

Melinda clicked off her katana, re-sheathed it in the leather harness on her back, and opened up her pack to find her water bottle. She unscrewed the cap and tipped the bottle up to drink. She had waited because she didn’t want to risk being caught without water. Melinda was too eager, and some of the liquid splashed down her chin. “Fuck,” she said, chiding herself for being careless. Money down the drain.

She positioned her water bottle under the spigot and tapped the well’s holo trigger again. “Retina scan prepared,” the display told her in a metallic voice. Melinda pulled what looked like a small metal ball from her pocket. She squeezed it and the thing popped open, projecting an image of two brown eyes back to the hologram. “Account accepted,” the well’s display announced. “Spigot will open in five seconds.”

“I never saw you do that before,” a voice said behind her. Melinda jumped, reaching over her shoulder for the katana. She cursed herself for not double-checking that everyone was gone.

“Those ain’t your eyes,” the man commented. “If you’re spending credits on my good water, they better not be counterfeit.”

“They’re not counterfeit,” Melinda said flatly. This was true. But the credits also didn’t belong to her — dead uncles were convenient. So was the eye-projecting device. However, this might not be the best time to explain either of those things. Melinda stared at the man. “Who are you? I came through this morning and no one hassled me.” She tapped the katana against her boot, which made a soft thunking noise. The blade wasn’t deployed yet but she could thumb it open quickly.

“They shoulda hassled you,” he retorted. “I work compliance for this satellite.” The man was tall, wearing beat-up dusty clothes like hers. His face was tough from the sun and his eyes were stern.

Melinda scoffed and turned back to the spigot, ready to fill up her water bottle. Compliance officer for a smuggling outpost? Sure, pull the other one. Before she could start the liquid flowing, Melinda felt a rough hand on her shoulder. She flinched.

“That wasn’t a joke. I said, I work compliance here. Let’s see who you are, girl.” He forcibly turned her around. One of his big-knuckled hands held a portable retina scanner.

Melinda closed her eyes immediately and let her body go limp, surprising him with her full weight. He could have held her up, but the sudden shift made his grip falter, and she jerked away. Melinda thumbed the safety on her sword. The dull metal split and its sharp edge emerged. “I’ll slice you up,” she warned him. The katana’s 2FA notification buzzed in her pocket, but she didn’t want to lose focus. Ten minutes before the sword would shut down again. That should be enough time.

She backed up slowly, still brandishing the katana, circling to the other side of the water pump. Better to have an obstacle between herself and this aggressive man. “What do you want, officer?”

He had his fists on his hips. “Seems like you’re running from the law.” He paused. “Bitch.”

He shrugged. “I’ll go get my pistol. See if you sass me then.”

Melinda watched him disappear through the tents. She crouched cautiously and finished filling up her water bottle. Then she started jogging back toward the broken-down car, pausing to look over her shoulder twice a minute. He didn’t seem to be following.

This may not seem like a conventional end to a story. Nothing much happened, and the heroine didn’t experience or overcome any particular hardship. My goal with the fiction in this newsletter is to convey a sense of a world we might inhabit at some point. Or maybe I’m just a lazy storyteller. Hard to figure out which.

We Already Occupy The Dystopia We Imagine

Keep Your Head Down