This website was archived on July 20, 2019. It is frozen in time on that date.
Exolymph creator Sonya Mann's active website is Sonya, Supposedly.
December 26, 2015

I talked on the phone with Darius Kazemi, best-known member of the #botALLY community and whimsical internet artist. First things first — is it pronounced Dah-rius or Day-rius? The latter, he said.

This is how reality is created, by asking questions and assimilating the answers. We participate in making meaning with each other. It’s unavoidable — you can’t opt out of being a cultural force without opting out altogether; relinquishing existence. You can, however, pursue the opposite aim. Amplify yourself.

All this from name pronunciation? Am I getting carried away? 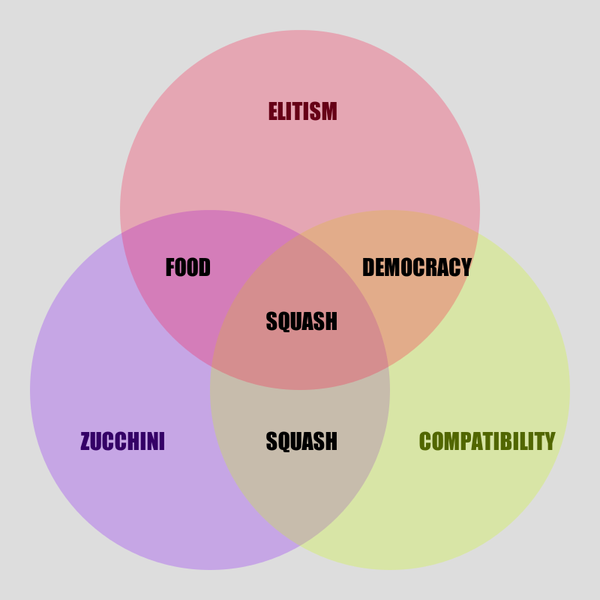 The latest nonsensical Venn diagram by @AutoCharts, one of Darius’ projects.

Darius used to make a living as a programmer. For years he worked in video games: “A lot of the core skills I learned making video games, I still apply to the stuff that I make today.” He wrote code to generate terrain, maps, and whole worlds. Now his creative practice is also his day job. Darius co-founded the technology collective Feel Train with Courtney Stanton. You can commission web art from Feel Train — for instance, they just finished developing a Twitter bot that will be part of a marketing campaign this spring. Of course, the members of Feel Train also continue express their own aesthetic urges.

I asked Darius to identify his cultural antecedents. He cited a variety of sources: Dada, the Situationists of the 1960s, William Burroughs’ cut-up poetry, and John Cage. “Name off your standard list of avant-garde early-mid-twentieth-century artists,” he joked. Then Darius mentioned Roman Verostko, who has been making digital art for almost fifty years. Verostko wrote “THE ALGORISTS”, an essay that functions as both manifesto and history. He describes algorists — those who work with algorithms — as “artists who undertook to write instructions for executing our art”, usually via computer. Verostko states, “Clearly programming and mathematics do not create art. Programming is a tool that serves the vision and passion of the artist who creates the procedure.”

Beau Gunderson told me something similar: “as creators of algorithms we need to think about them as human creations and be aware that human assumptions are baked in”. I’ve seen many algorists stress this principle, that computers can’t truly create. Programs only encompass process, not genesis.

Darius told me about a book that profoundly affected him: Alien Phenomenology by Ian Bogost. Here Darius was introduced to the possibility of “building objects that do philosophical work instead of writing philosophy”, as he put it. The concepts in Alien Phenomenology acted as “permission to do something that doesn’t even have a name”. Soon Darius began spinning up the bots that comprise his current “stable”, starting with Metaphor-a-Minute.

Philosophical underpinnings aside, Darius doesn’t regard his art as a heavy-handed intellectual exercise. His bots are conceived like this: “I think, ‘Blah is funny.’” Then he considers blah further and concludes, “I could make that. I should make that!” He says that bot-making is “way different from a game, where you have to beg and convince people to engage with it”. The bots invite interaction and duly receive it.

I asked Darius about power. He said, “I think a lot about the rhetorical affordances of bots, and how bots allow you to say things that you wouldn’t otherwise.” A bot allows its creator to express messages indirectly, through a third party. Darius continued, “Bots can get away with saying things that normal people can’t. […] People are very forgiving of bots.” We treat them like children or pets. He added, “Bots say the darnedest things!”

The Bot Tries Not to Surveil Humans

Is the computer watching you? It’s hard to tell. You can’t make up your mind. The computer’s attention skips from eye to eye. It has so many, and you wonder how it chooses where to settle its sight. What does the computer see, really? Numbers? In a way, humans see numbers too — light wavelengths can be measured, and that’s basically what eyes do — but we translate them into very different artifacts.

Of course, saying “the computer” is a simplification. It’s not a single entity, but rather a series of commands, of instructions. The program follows the rules that were set up for it, and it follows those rules through many different machines. 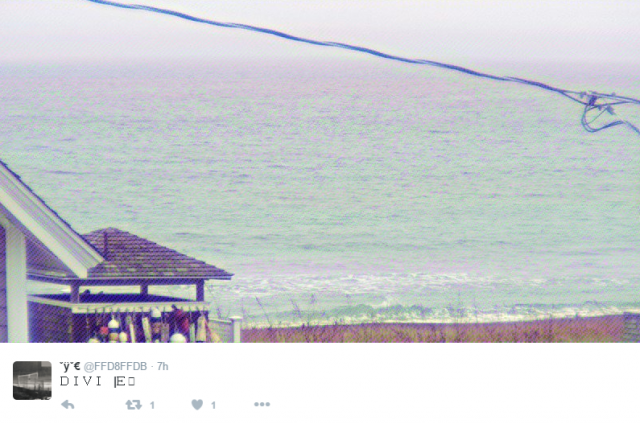 Minnesota programmer Derek Arnold made a bot called @FFD8FFDB that tweets color-processed stills from obscure security cameras. He summarized it beautifully in an essay on the project:

My script captures a frame, and gums it up with an Imagemagick script. I modify the colors in the YUV colorspace, crop out identifying information provided in the margins, and ensure the images are consistent. I use Wordnik to generate accompanying text and replace some characters with graphics characters. This is just for effect. @ffd8ffdb’s goal is superficial; I just like the way the tweets look. I enjoy that strangers find it unsettling, amusing, or even uninteresting. Like other Twitter bots, its unending tenacity is part of its charm. Many cameras go dark at night, most not having enough illumination to provide images. The bot doesn’t care and keeps stealing shots. 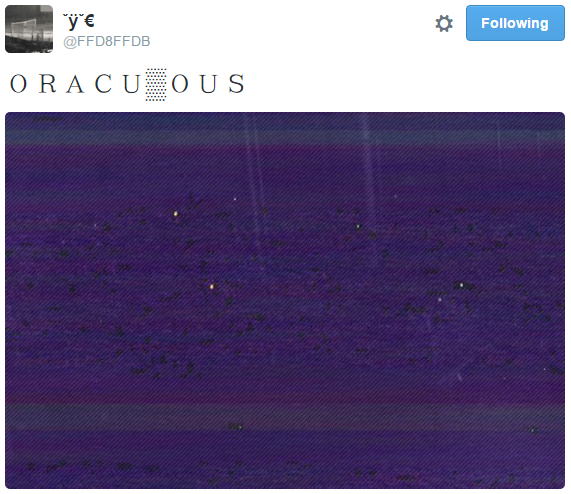 I wasn’t initially sure from this description, but Derek confirmed to me that @FFD8FFDB is fully automated. You could say the bot has a life of its own — albeit one completely defined by its human creator. And yet @FFD8FFDB keeps going regardless of whether Derek participates. As he said, “I had the initial control of it…”

The bot’s feed contains very few images of people. When I scroll through it, I feel ennui. The world looks abandoned. Derek told me that this sense of melancholy emerged unintentionally. He avoided using cameras that would show humans — even now, if a face appears too clearly, he’ll delete the post — because he didn’t want @FFD8FFDB to be invasive, exploitative, or titillating. Derek searched for image sources in “subsections of the business-class internet” specifically to avoid even the most banal intimacy.

He said as much in his essay, but I was surprised by how straightforward Derek’s artistic goals were. He told me, “[The bot] was a thing that I did that I wasn’t thinking too hard about at first.” He became interested in generative art, inspired by numerous other #botALLYs, and simply acted on his impulses. Scratching this itch involved significant effort: Derek estimated that he’s put in twenty-to-forty hours of work on @FFD8FFDB over the past year. “It took a lot of trial and error to get the look I wanted out of it.”

This project is clearly “of the internet”, as they say. On the phone, Derek and I both stumbled over the bot’s name. He told me, “If I ever thought I’d be saying this out loud, I might have named it differently.” Derek was initially surprised by @FFD8FFDB’s popularity — the account now has more followers than his personal Twitter. He added, “I follow the account myself — I don’t follow all of the stuff that I’ve made — and I like it because it surprises me on a consistent basis.”

My favorite discovery from this conversation is that other Twitter users respond to @FFD8FFDB — literally respond. Derek laughed, “People reply to the bot all the time, and it’s set up to send another image.” Those threads are ready to be explored. 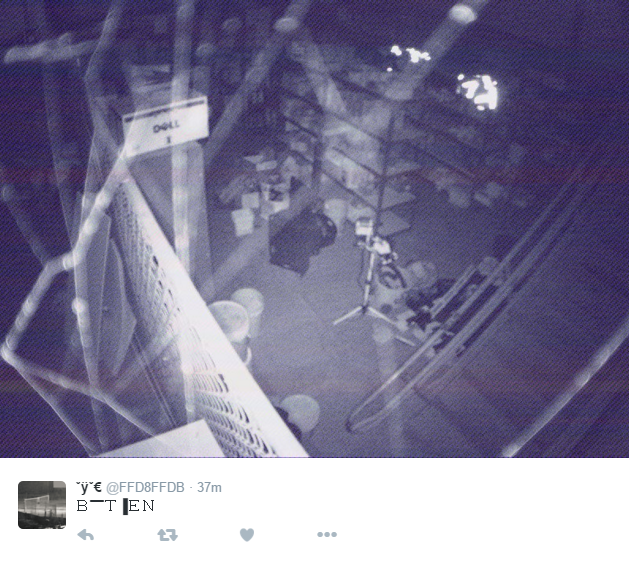