The following article was written by Mike Dank (Famicoman).

As technology evolves, the line between science and science fiction starts to blur. At one point, the thought of space travel or even micro-computing was only a dream of the future, yet it became a reality within or before our lifetimes. More and more, we find ourselves questioning if something is real or only exists in thought — a pie-in-the-sky dream of hopefuls or holdouts. We are starting to find that the future is now, whether we are ready for it or not.

A video about a modular life-form grown from human cells made its rounds on the Internet only a few weeks ago. In the video, you are first presented with a couple of slabs of meat on a stainless steel counter. Cut to a scientist who introduces you to “OSCAR”, a modular human-like organism. We see Oscar get assembled: a brain module (literally a black box of electronic components) is plugged into a heart module is plugged into a lung module is plugged into a kidney module. With each insertion, we see the creature twitch, pulsate, or squirm. Then limb modules are added and Oscar awkwardly crawls around in search of warmth. 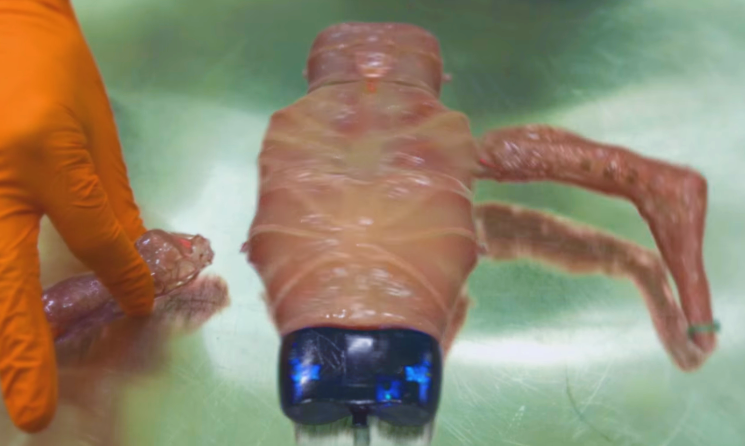 This Cronenberg-esque video was both terrifying and fascinating. With imagery straight out of eXistenZ (1999) or Naked Lunch (1991), we watch this organic creature struggle and writhe as it gains access to new organs; this is body horror from our fever dreams and darkest nightmares. It seems real, real enough, and a large number of people believed that the video was legitimate. After making the rounds on Facebook, it was eventually discovered to be content from a science fiction web series — not a promotional video from a medical lab deep in the bowels of some no-name organization.

What does this say about the state of our society? Is it not too far-fetched to believe that someone can grow living organs, link them together, and have the resulting life-form instinctively move around the room? For years we have been influenced by news on advancements in scientific fields such as biomedical and biomolecular engineering. From the infamous WWII Soviet propaganda film Experiments in the Revival of Organisms (1940), where a dog’s head was kept alive independent of a body, all the way up to the famed 1997 Vacanti mouse, with what looks like a human ear on its back, we have been shocked and mystified by the promises of science, especially its perversions. Even today we see cables from the relatively new field of tissue engineering with scientists poring over lab-grown meat cultures to be used as food or refining bioartificial liver devices constructed from animal cells.

Are we going to see this type of work packaged and sold to the consumer in a glossy box anytime soon? I don’t think so. I will admit, it would be incredibly interesting if I could head down to my local Best Buy and pick up Samsung’s new bio-hacking kit so I could grow my own cells and build a life-form as casually as I would order Sea-Monkeys from the back of a comic book. Imagine an organic branch of littleBits, selling you packs of organ and tissue for $99.95. What about a biopunk hacker who wants to grow himself a new eyeball with better night vision? This opens things up to more political and philosophical controversy.

While the video wasn’t real, we may not be lagging too far behind the concept of a modular body, speaking technologically. As the line between fact and fiction flickers and fades, we see the potential for groundbreaking scientific advancements for the human race, and unhinged scientific experiments stemming from the simple question, “What if?”

Our world may not be ready for Oscar.

Now go read everything else Mike Dank has written.

Unsolved Appearance of a Virus