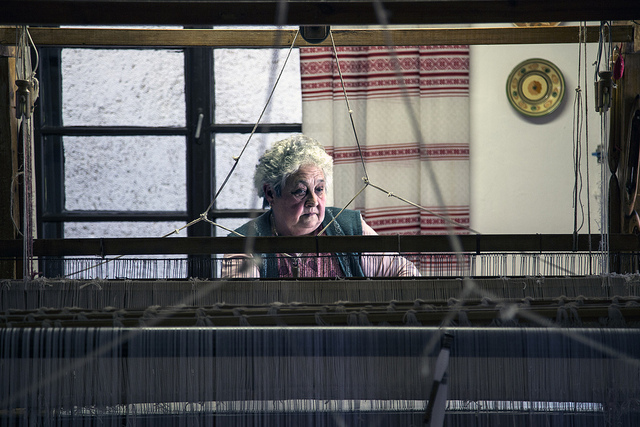 Old woman working at a loom. Photo by silas8six.

I interviewed Steve Klabnik via email. If you’re part of the open-source world, you might recognize his name. Otherwise I’ll let him introduce himself. We discussed economics, technological unemployment, and software.

Exolymph: The initial reason I reached out is that you’re a technologist who tweets about labor exploitation and other class issues. I’m currently fascinated by how tech and society influence each other, and I’m particularly interested in the power jockeying within open-source communities. You seem uniquely situated to comment on these issues.

Originally I planned to launch right into questions in this email, but then I start opening your blog posts in new tabs, and now I need a little more time still. But! Here’s a softball one for starters: How would you introduce yourself to an oddball group of futurists (which is my readership)?

Steve Klabnik: It’s funny that you describe this one as a softball, because it should be, yet I think it’s actually really tough. I find it really difficult to sum up a person in a few words; there’s just so much you miss out on. Identity is a precarious and complex topic.

I generally see myself as someone who’s fundamentally interdisciplinary. I’m more about the in-betweens than I am about any specific thing. The discipline that I’m most trained in is software; it’s something I’ve done for virtually my entire life, and I have a degree in it. But software by itself is not that interesting to me. It’s the stuff that you can do with software, the impact that it has on our world, questions of ethics, of social interaction. This draws a connection to my second favorite thing: philosophy. I’m an amateur here, unfortunately. I almost got a higher degree in this stuff, but life has a way of happening. More specifically, I’m deeply enthralled with the family of philosophy that is colloquially referred to as “continental” philosophy, though I’m not sure I find that distinction useful. My favorites in this realm are Spinoza, Nietzsche, Marx, and Deleuze. I find that their philosophical ideas can have deep implications for software, its place in the world, and society at large.

Since we live under capitalism, “who are you” is often conflated with “what do you do for work”. As far as that goes, I work for Mozilla, the company that makes Firefox. More specifically, I write documentation for Rust, a programming language that we and a broader community have developed. I literally wrote the book on it 🙂 Mozilla has a strong open-source ethic, and that’s one of the reasons I’ve ended up working there; I do a lot of open-source work. On GitHub, a place where open-source developers share their code, this metric says that I’m the twenty-ninth most active contributor, with 4,362 contributions in the last 365 days. Before Rust, I was heavily involved with the Ruby on Rails community, and the broader Ruby community at large. I still maintain a few packages in Ruby.

Exolymph: To be fair, I described it as a softball question precisely because of the capitalist shortcut you mentioned, although I’m not sure I would have articulated it like that. Darn predictable social conditioning.

Steve Klabnik: I love the idea of working towards a commons. I’d prefer to write software that helps as many people as possible.

What frustrates me is how many people can’t be paid to do this kind of work. I’ve been lucky to been able to feed myself while working on open source. Very, very lucky. But for most, it’s doing your job without pay. If we truly want a commons, we have to figure out how to fund it.

Exolymph: I’ve been reading a bunch of your blog posts. I’m curious about how you feel about working in an industry — and perhaps doing work personally — that obviates older jobs that people used to count on.

Steve Klabnik: It is something that I think about a lot. This is something that’s a fundamental aspect of capitalism, and has always haunted it: see the Luddites, for example. This problem is very complex, but here’s one aspect of it: workers don’t get to capture the benefits of increased productivity, at least not directly. Let’s dig into an example to make this more clear.

Let’s say that I’m a textile worker, like the Luddite. Let’s make up some numbers to make the math easy: I can make one yard of fabric per hour with my loom. But here’s the catch: I’m paid by the hour, not by the amount of fabric I make. This is because I don’t own the loom; I just work here. So, over the course of a ten hour day, I make ten yards of fabric, and am paid a dollar for this work.

Next week, when I come to work, a new Loom++ has been installed in my workstation. I do the same amount of work, but can produce two yards of fabric now. At the end of my ten hour day, I’ve made twenty yards of fabric: a 2x increase! But I’m still only being paid my dollar. In other words, the owner of the factory gets twice as much fabric for the same price, but I haven’t seen any gain here.

(Sidebar: There’s some complexity in this that does matter, but this is an interview, not a book 🙂 So for example, yes, the capitalist had to pay for the Loom++ in the first place. This is a concept Marx calls “fixed versus variable capital”, and this is a long enough answer already, so I’ll just leave it at that.)

Now, the idea here is that the other factories will also install Loom++s as well, and at least one of the people who’s selling the cloth will decide that 1.75x as much profit is better, so they’ll undercut the others, and eventually, the price of cloth will fall in half, to match the new productivity level. Now, as a worker, I have access to cheaper cloth. But until that happens, I’m not seeing a benefit, yet the capitalist is collecting theirs. Until they invest in a Loom2DX, with double the productivity of the Loom++, and the cycle starts anew.

Yet we, as workers, haven’t actually seen the benefits work out the way they should. There’s nothing that guarantees that it will, other than the religion of economists. And the working class has seen their wages stagnate, while productivity soars, especially recently. Here is a study that gets cited a lot, in articles like this one.

“From 1973 to 2013, hourly compensation of a typical (production/nonsupervisory) worker rose just 9 percent while productivity increased 74 percent. This breakdown of pay growth has been especially evident in the last decade, affecting both college- and non-college-educated workers as well as blue- and white-collar workers. This means that workers have been producing far more than they receive in their paychecks and benefit packages from their employers.”

We haven’t been really getting our side of the deal.

So, this is a futurist blog, yet I’ve just been talking about looms. Why? Well, two reasons: First, technologists are the R&D department that takes the loom, looks at it, and makes the Loom++. It’s important to understand this, and to know in our heart of hearts that under capitalism, yes, our role is to automate people out of jobs. Understanding a problem is the first step towards solving it. But second, it’s to emphasize that this isn’t something that’s specific to computing or anything. It’s the fundamental role of technology. We like to focus on the immediate benefit (“We have Loom++es now!!!”) and skip over the societal effects (“Some people are going to make piles of money from this and others may lose their jobs”). Technologists need to start taking the societal effects more seriously. After all, we’re workers too.

I’m at a technology conference in Europe right now, and on the way here, I watched a movie, The Intern. The idea of the movie is basically, “Anne Hathaway runs Etsy (called About the Fit in the movie), and starts an internship program for senior citizens. Robert De Niro signs up because he’s bored with retirement, and surprise! Culture clash.” It was an okay movie. But one small bit of backstory of De Niro’s character really struck me. It’s revealed that before he retired, he used to work in literally the same building as About the Fit is in now. He worked for a phone book company. It’s pretty obvious why he had to retire. The movie is basically a tale of what we’re talking about here.

Exolymph: I’m also curious about what you’d propose to help society through the Computing Revolution (if you will) and its effect on “gainful employment” opportunities.

Steve Klabnik: Okay, so, I’m not saying that we need to keep phone books around so that De Niro can keep his job. I’m also not saying that we need to smash the looms. What I am saying is that in a society which is built around the idea that you have to work to live, and that also rapidly makes people’s jobs obsolete, is a society in which a lot of people are going to be in a lot of pain. We could be taking those productivity benefits and using them to invest back in people. It might be leisure time, it might be re-training; it could be a number of things. But it’s not something that’s going to go away. It’s a question that we as society have to deal with.

I don’t think the pursuit of profits over people is the answer.